As some of you may recall, I installed the MotorLux carbon fiber side scoops a few years ago and they’ve remained on my car ever since. The side scoops lasted longer than MotorLux did (they are no longer in business). Truth be told, I was never overly fond of the way the driver’s side scoop attached with must some wire bending to try and make it hold tight against the body of the car. It was a pain to reach around inside of the scoop and bend the wires so that everything would sort of stay in place. Enter Fluid987 and their updated rendition of the same style carbon fiber side scoop. Fluid987 worked closely with former member John Copeland before he passed away in an attempt to make a better side scoop. Let’s start by comparing the old MotorLux to the new Fluid987. Here’s a picture of the backside of both: 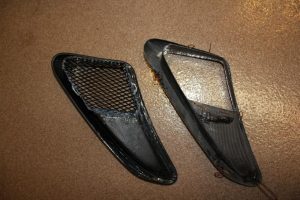 As you can see with the MotorLux one on the right the wires used for crimping the part on have turned a lovely shade of rust in the intervening years. They were still plenty strong, but would it have hurt them to use stainless wires? You can also see the weave pattern is different, I went with the 1×1 pattern for the new scoops although I believe that they are available in other patterns from Fluid987. You may also note that Peter uses a lot of silicone adhesive to hold the wire mesh in place, while this is fine, it did actually cause me an issue on the passenger side when I wanted to try an alternative method of installation, but more on that later.

Here is a frontal shot of both scoops:

See the Article Gallery for a close up of the MotorLux piece which had started to lose some gloss to its surface, the finish on the Fluid987 piece was far superior in gloss, thickness and perceived durability.

Another close up of the Fluid987 piece:

Now that I had removed the MotorLux piece from the driver’s side (US vehicle reference for sides) you can see that I still had a mesh piece installed over the plastic pins on the retainer ring inside the vent housing.

Here is the vent piece removed from the car, it simply pulls out with some tugging. That’s important to note because if you attached something to this vent or these posts it could simply pull the piece out. This is why in Fluid987 included instructions they want you to drill through the plastic and install sheet metal screws to hold the ring to the body of the car. While that approach certainly will work and many installs have been done that way, I decided I didn’t want to do that if I could avoid it and came up with an alternative method. Let’s look at the hardware included with the drivers side install in the kit from Fluid987. It consists of 2 springs with wires attached to stretch them (although I took these off and used either a needle nose pliers or a T-spring puller tool – but mostly pliers once I settled on springs), a small steel plate with nut, screw and washers, and 4 sheet metal screws. (which I didn’t use)

I took some photos of the factory driver’s side plastic and how the plastic pins fit in the black plastic housing for the factory side pieces for those who wanted some close ups of what those look like and how they come apart. Check the articles gallery link for those photos.

I went to the local hardware store and bought a piece of aluminum to make brackets out of, here is the piece with the specs on the label:

I then inserted the piece into the side vent housing opening to determine how long of a piece I would need to cut. It turns out that about 3-1/2 inches works for both sides, although the right (rearward side) could be a little longer if you want. I then drilled a hold using a 3/16 drill bit for the hardware to attach to the car body and a smaller hole for the spring to attach to.

At this point I tried to install one of my brackets with the springs included from Fluid987. This next picture shows that I cut down one of the brackets trying to be able to use the short spring included with the kit but I found the short spring much too hard to stretch into place. It was so hard in fact that I bent my bracket and bent the steel tab that is part of the car body at one point. I ended up sourcing 2 new springs from my local Nuts&Bolts; store (spring #86 in their assortment boxes). The new, longer and easier to stretch spring is on the right:

I then proceeded to test fit the attachment point at the upper right of the driver’s side scoop, the next photo shows that I’ve stretched the spring and attached it to the wire loop on the scoop. This picture was hard to take since I had to hold the scoop back against the spring tension and the camera at the same time!

Here is the bracket and spring I made for the upper left attachment point on the driver’s side. I made this aluminum piece long enough to go under the metal tab on the body and all the way to the back where the mesh screen is. The bolt and nut were 8/32 and I used a standard washer on the front side and a lock washer on the back. I sourced these nuts, bolts and washers at my local Nuts&Bolts; hardware store.

…and a shot of the upper right bracket and spring:

Next I installed the lower steel bracket with the hardware provided in the kit and placed a dab of silicone on the bracket. In the Fluid987 instructions they want you to put a big ball of it on the bracket and then press the scoop into the silicone and let it sit for 24 hours to solidify an hold it in place. I wasn’t fond of “gluing” something to my car, my thought being “what if I want to remove these scoops at some point?” so I decided to use the blob simply mark the back side of the scoop where it would touch the bracket. You can see in the next picture by my thumb some of the silicone that came off on the back of the scoop after allowing it to mount up and touch the metal bracket. (Yes I had to install then remove then reinstall the upper springs for this operation)

Instead I decided to install 1/2″ magnets (available at hardware or arts and crafts stores) to hold the lower part of the scoop to the steel bracket behind it. I used some Gorilla Glue to attach the magnet to the back of the scoop and let it dry a couple of hours before fitting up to the car.

While I waited for the glue to dry for the magnet on the back of the driver’s side scoop I decided to take apart the passenger side.

Here is the backside of the MotorLux scoop that I took off. If there was one thing I thought MotorLux did well it was to purchase the interior plastic housing for the passenger side and adapt their scoop to make use of that housing. You can see that they had 2 bolts that were epoxy’d to the back of the scoop then those bolts went through holes in the factory plastic piece and had washers and nuts to hold them in place. This created a single unit that installed exactly the same way as the factory piece using the plastic pins that would catch in the black plastic backing piece. I really wish that Fluid987 would take the same approach here. The primary reason is that with the black backing piece in place the interior of the vent opening is sealed against the elements. With the Fluid987 installation method there is a gap where water could get back inside.

I attempted to mate up the factory piece with the Fluid987 outer scoop but due to too much silicone and the way the mesh was installed I could not make it work. If I could get a scoop without the mesh in place yet I think I could get these parts together (with springs no less) and then have a complete unit to simply clip into place.

Since I couldn’t do that without possibly ruining the outer scoop from Fluid987 I decided to follow their installation method instead. The next step is to drill holes in the inner plastic to put cotter pins with springs attached through the holes. Here is the upper left hole which I drilled using the provided drill bit.

The right side is trickier to do. First you need to feel where the plastic ends and the rubber attached to it begins. You do NOT want to drill just through the rubber or that will weaken and rip over time. Instead you need to drill through the plastic just beyond the rubber. In the next picture I am holding the rubber back to the right so you can see the plastic and see the hole I drilled through it. I used a short drill that I had as the small drill bit with tape on it to use by hand just didn’t work well for me. Therefore, I’d recommend getting your hands on a small drill to make this job a lot easier.

Here’s that same spring after I’ve used my needle nose pliers to pull it outward and attach it to the loop on the side scoop.

I repeated the same process with installing the steel piece at the bottom, applying silicone to mark the backside of the scoop, then installing a magnet with gorilla glue. As luck would have it I needed to leave for a few hours and do something else so when I got back I installed the scoops on both sides using springs at the top and the magnet at the bottom. Although the scoops feel pretty solid, if the magnets don’t work out well I can always glue them in place with silicone adhesive, or use bigger magnets or more steel plates on the side with another magnet, etc. but so far things are holding up nicely. Here’s a shot of both sides installed:

I should note that at the very bottom tip of the passenger side scoop there is a tiny gap between the black rubber that outlines the scoops and the housing opening itself but it is pretty small and I don’t see it as being an issue.

Overall the parts were very nice and the installation, while a bit tedious at times while trying to stretch springs, wasn’t overly difficult. I’m confident members could install these using the directions and methods provided by Fluid987, or using an alternative method like the one I chose for the driver’s side scoop. If you have any questions please ask me in the forum or via email and I’ll do my best to answer them.

(2020 Update: It looks like a couple of images were lost over time and sadly when Vertical Scope migrated Planet-9.com to Xenforo the images library that went with this article was also lost. Fluid987 is no longer in business and prodgers was banned from Planet 9 for running off with people’s money, but at one point someone had purchased their molds and was selling these scoops under a different brand by pdpcomposites and you can contact them here: https://www.planet-9.com/members/pdpcomposites.27655/ )

This site uses Akismet to reduce spam. Learn how your comment data is processed.

This website is for the use of Cayman Club members to better facilitate club activities as well as to share information among members.  The Cayman Club was founded in 2005.